The following two pictures were sent to RGC anonymously. 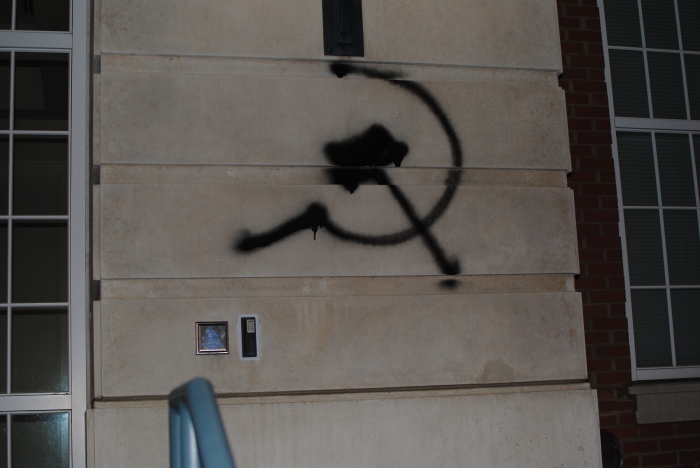 December 26th, 2018 marks 125 years since the historic birth of the great Marxist Mao Tsetung. Born in Shaoshan, Hunan in 1893, he grew up farming in a peasant family. His father was very strict and wanted him to conform to traditional Confucian ways. But from an early age Mao rebelled against his father’s backwards teachings and the feudal system, even rejecting a marriage arranged for him at age 13. In his early years he was concerned with changing China with values like “representative democracy” but as he aged into his teens the spirit of rebellion engrossed young Mao. Soon he would abandon his concern for simple change and embrace his true revolutionary spirit. [2]

When Mao arrived in Changsha in 1911 the Kuomintang’s (KMT) democratic revolution had been ignited, and immediately thereafter he joined their army. The revolution was betrayed when its founder Sun Yat-Sen was pushed out of leadership of the KMT. After Mao left the KMT army, he began to study Marxism and became a Marxist proper by 1918. Solidifying himself as a servant of the people and a dedicated revolutionary, Mao immersed himself wholly into the anti-imperialist May 4th Movement. During this time, he led meetings, spread pamphlets and agitated for Marxism when the masses were fighting against the continued imperialist domination of China—Mao leapt out in front seeking to lead, and did not sit on the sidelines gesticulating. Though they were crucial in Mao’s own development, the KMT would go on to be led by the anti-Communist Chiang Kai-Shek who was a great thorn in the side of the Communist Party of China (CPC).

Founding of the CPC
Mao was one of the thirteen representatives at the founding congress of the CPC in 1921. In the time leading up to his seizure of top leadership in PPW Mao made many contributions to the immortal science of Marxism. He firmly placed the peasantry as a close ally to the proletariat in the course of the New Democratic revolution, allowing Marxism to be concretely applied to Chinese conditions. He continued the development of Marxist philosophy through the study of contradictions. Among the groundbreaking work written during this time, “On Protracted War” stood out immensely. This piece theorized the definitive military strategy for the proletariat, asserting universal lessons for Communists around the world.

“Next, let us consider war…[a]t the initial stage they will merely experience a good deal of fighting and, what is more, suffer many defeats. But this experience (the experience of battles won and especially of battles lost) enables them to comprehend the inner thread of the whole war, namely, the laws of that specific war, to understand its strategy and tactics, and consequently to direct the war with confidence.”

Mao was conscious of the various deviations that existed within the party and organized against them. In “On Protracted War” he makes a great effort to highlight the main errors plaguing the revolutionary forces: those who overestimate the strength of the enemy and those who desire a quick victory in the war against Japan. Highlighting the struggle against these deviations Mao asserts that only through practice can theory stand up on its feet. Deviations from Marxism only come to light through practice, principally the class struggle.

The Chinese revolution faced incredible difficulties through its 28 years of PPW, including the Long March starting in 1930. On the torturous path, Mao was repeatedly attacked for his ideas and leadership but in 1935 after the Tsunyi Conference Mao finally won the struggle against the right and “left” lines in the party, assuming central leadership. With time this resulted in the completion of the New Democratic revolution and establishing the Dictatorship of The Proletariat in 1949. True to Marxism, Mao’s theories were not written from the heights of the ivory tower. As always this came with immense personal sacrifice: his first wife along with all three of his siblings were killed as brave fighters in the revolution. [2] Mao similarly on the ideas of Marx, Engels, Lenin and Stalin, stretching the bright red flag of Marxism over one-quarter of humanity.

From Mao to Maoism
Great Leader Chairman Gonzalo and the Communist Party of Peru (PCP) paid great homage to Mao by synthesizing Maoism as the universal and third, highest stage of Marxism [3]. Among Mao’s core teachings synthesized by the PCP were the law of contradiction as the only force for the transformation of matter, Mao’s insistence against the revisionist thesis of the “productive forces”, and his incisive criticism of the economy of the Soviet Union.

Among Chairman Mao’s great lessons, the one that stands above all is the continuation of revolution during socialism through continued cultural revolutions towards Communism. Impossible to overstate, the Great Proletarian Cultural Revolution (GPCR) was the highest point in the history of the international working class. The agents of counterrevolution who sought to take the liberated socialist society back to capitalism were exposed, criticized in front of the masses and were either re-educated or purged from their posts. Bombarding the capitalist headquarters, the masses once again became the motive force of history—this time it was the history of socialism.

During his transcendental speech while imprisoned in 1992 Chairman Gonzalo was sure to recognize Chairman Mao’s upcoming 100th birthday, saying,

“…Next year will be the one hundredth anniversary of the birth of Chairman Mao. We must celebrate these one hundred years! We are organizing it with the Communist Parties. We want a new manner, a celebration which will be the conscious comprehension of the importance of Chairman Mao in the world revolution and we shall begin the celebration this year and we shall finish it the next. It will be a grand process of celebration.” [4]

Twenty-five years after the transcendental speech, our beloved Chairman Mao’s legacy lives beyond the anticommunist history that capitalism has penned in for him. Forever alive in the hearts and minds of the proletariat, Chairman Mao belongs to the banner of principally Maoism today! His lessons have ideologically steeled the proletariat on its mission to destroy itself as a class. Celebration of Chairman Mao is confirmed through People’s War.